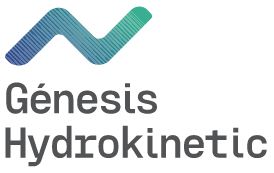 Genesis Hydrokinetic is involved in developing turbines with the purpose of utilizing moving waters for renewable kinetic energy.

More than 70% of the electrical energy we consume comes from generation using fossil fuels, which produces about half of the greenhouse gases that we emit into the atmosphere. Based on this, it is vital to innovate new ways of generating energy in a sustainable manner.

The team behind Genesis Hydrokinetic responds to this issue by implementing moving waters such as rivers, canals and ocean currents into the generation of renewable energy. Their turbines generate energy without the need to carry out civil works such as dikes or dams, without modifying watercourses or aﬀecting aquatic life.

The turbines could be described as simple in design, instalment and material sourcing, yet at the same time extremely complex by the amount of engineering work that came to its creation. The result is a product of the highest eﬃciency in energy production in compact and versatile equipment.

Thanks to the global shift towards renewable energy and in alliance with the Paris Climate Agreement, Genesis Hydrokinteic proposes to attract governments who seek to align themselves with the new energy paradigm and comply with the UN's Sustainable Development Goals.